This spring Song Circus did a tour with our project “Birds”, a sensual and imaginative narrative performance for children inspired by the birdlife around us! 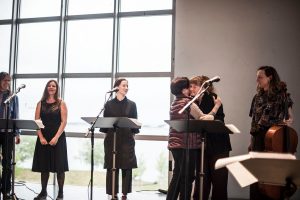 Song Circus/ Tarozzi/Walker – music by Criton at Only Connect Festival

Is it possible to mix spectral music with Pauline Oliveros and Salvatore Sciarrino? According to Bjørnar Hsbbestad and nyMusikk, we did so when we performed Pascale Criton’s music for the first time in Norway in May, together with violinist Silvia Tarozzi and cellist Deborah Walker.

According to 5 against 4 it was a nice experience!

“All five performers were involved in Soar II, receiving its world première, and to a large extent the music inhabited a related soundworld to the solo pieces. Close unisons abounded, notes jarring and buzzing in close proximity like same-charged magnetic poles repulsing each other. It was deeply mesmeric, exhibiting an incredible sense of simultaneous tension and rest; yet in almost every other respect the piece was similarly liminal, continuously caught between unison and dissonance, movement and stasis, noise and breath, and at the last, between sound and silence, voices and instruments alike interacting with air to create only the idea of sound, an idea made real in our imaginations. Absolutely stunning.” 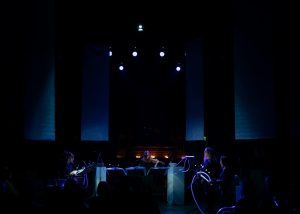 What to say, except for feeling thankful? What a lovely review!

“One of the most beautiful works I heard took place at Kulturkirken Jakob in an afternoon concert given by the outstanding vocal quartet Song Circus (who had been so impressive at this year’s Only Connect festival).”
….
“– the work, including hardanger fiddle performed by Britt Pernille Frøholm, was breathtakingly immediate, creating drama from the most microscopic of sounds and gestures. Soft, close singing was interspersed with articulated breaths and a plethora of tiny vocal tics and twitches, many of which seemed almost involuntary. Although its language was, from one perspective, a broken-up network of minutiae strung together into a loose-woven tapestry, there was at the same time a sense that everything we were hearing had actually begun life as a changeless, eternal drone, which was being modulated and disrupted by the quartet’s vocal actions. At one extreme, Ulvo practically destroyed the fabric of the music later on via an outbreak of stubbornly persistent coughs, while at the other extreme, she united the singers into small concentrations that vaguely resembled chant. Though it was in its own way just as wildly experimental as the rest of the music during the opening weekend at Ultima 2019, Absence had a focus, an intensity and above all an elegance that set it apart.” 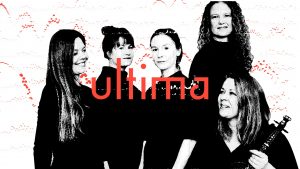 Last weekend was the world premiére of our new performance “Graataralagjet”, a new vocal song cycle and a themed concert based around one of Norway’s grisliest folk tunes. We have commissioned new works from Norwegian composers Therese Birkelund Ulvo and Nils Henrik Asheim, and together with us, as a guest musician, was the wonderful fiddle player Britt Pernille Frøholm.

Kulturkirken Jakob was the perfect stage, and Tove Kommedals visual installation became the immersive and expressive artwork we wished for. Nils Henrik Asheims and Therese Birkelund Ulvo have both composed music we will bring with us and perform a lot. The last piece in the Graataralagjet trilogy, Stones by Tyler Futrell, will be premiered in November, another beautiful piece of music! Thank you Thorbjørn Tønder Hansen and the Ultima festival team. You were professional to the fingertips!

Yet another new and lovely review!

“What you will actually hear here subtly takes sound beyond the confines and preconceived notions of what you’ve ever experienced before.”
“The best way of describing “Landscape” is an aural dreamworld that sometimes mixes natural ambient with snippets of other-worldly elements, and also whispers. Vocally, the composition ranges from onomatpoetic utterings to seductive, siren-like glissandoes.”
…..
“I readily admit that most of my interest in avant-garde modern music stemmed from an earlier time when I was ever so curious about music that did not conform to convention and transcended traditional form. ‘Anatomy of Sound’ however has rekindled a spark for this kind of thing, being some of the best “new music” I’ve heard in a long, long while.”